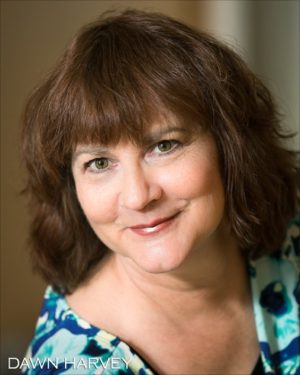 Dawn, an actress and singer, has been performing since childhood. She was always the first one with her hand up in grade school to read out loud to the class so becoming an audiobook narrator was a natural progression for her.

Dawn studied acting in her undergrad and worked part time in the world of stage and film for several years before embarking on a career in voice acting. Her initial course was an introduction to voice acting class taken at the WCS studios over 10 years ago. Since then, Dawn has studied with a multitude of coaches all over North America.

1. After entering an international competition, being awarded the job of narrating Helen Gurley’s Brown’s “Sex and the Single Girl” on the book’s 50th anniversary; and

2. Being invited to contribute stories to a compilation composed of a multitude of award winning narrators for the 2014 “June is Audiobook Month” campaign.

3. Being nominated for a SOVOA award for her narration of “The Wife” by Meg Wolitzer.

4. Being awarded an Earphone Award for her joint narration of “A Manual For Cleaning Women” by Lucia Berlin.

Dawn is also a stage and screen actress and holds bachelors and masters degrees in law.

You can hear demos of Dawn’s work on her website.